Welcome to Silent Film Sunday! This week we are in for a short two-reel (under 25-minute film) as I was on a bit of a deep dive of trying to watch all of Lillian Gish’s films and I came across The Mothering Heart and had to write about it.

A young married couple struggles to get ahead but, as he becomes more successful in his job, he Is lead astray by money and another woman. His heartbroken wife decides to leave him and return to her mother’s home where she bears their child.

If you had the chance to read our review of D.W. Griffith and Lillian Gish’s 1920 film Way Down East, it delves into the world of fake marriages, trying and failing to raise a sickly child and finally redemption. It is a truly wonderful film and after seeing it I can now see why D.W. Griffith chose his muse, Lillian Gish, to be the star of one of the most commercially successful films of the silent era. 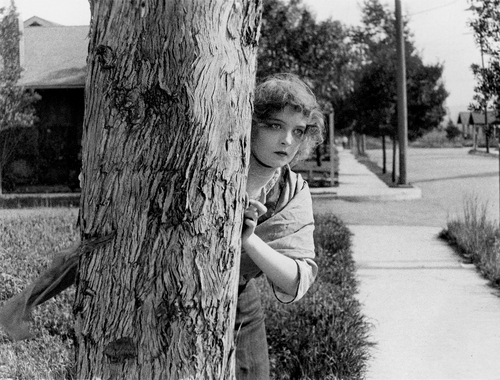 Gish has always played the waif, but the connection here with her Way Down East character Anna is quite comparable. Both betrayed by their husband (though fake husband in Anna’s case) made to bare her child without him and as catastrophe falls upon her, have the strength to continue on. Even more remarkable is that The Mothering Heart is 7 years earlier than Way Down East.

D.W. Griffith usually loves a close up to show Gish emoting expertly, but when he has the chance to he either keeps the shot further away or has Billy Bitzer’s camera focus on her clawing at a tree that she is still hiding behind when she sees his final betrayal. A rare time where he was able to hold back and let the scene play out without a close-up cut of a facial reaction. What stood out for me was that for the last 5 minutes there are no text cards. Griffith knew we did not need them for Gish and Walter Miller were more than capable on their own to show how broken they were.

Of course, the entire film is taken to another level thanks to Gish’s work. She was simply the best silent era actress. Her ability to show subtle emotions and to be refrained in her performances, but still tell so much is unbelievable when compared to other actors and actresses of the same era.

At the start, we see a woman who is trying to help pay the bills and keep a happy household for her and her husband and as soon as they both start to find the success she can truly be happy due to her pregnancy. The little nuanced glimpses she allows the audience to see say far more than a text card should. Then, when her husband gets too successful, the hard work that she had put in and the deserved relaxation and joy of being pregnant is taken away from her by simple disgruntled actions of how she is keeping the house and herself. The little heartbreaks she emotes during these criticisms are already hurtful to an audience.

This, of course, escalates to when she finds another woman’s gloves in his jacket pocket and her first response is of anger, we see her face scrounge up as if she is about to explode. Yet she calms as she scrunches the gloves in her palm instead, trying to remain calm and brave and laughs it off. But we can see that she will not forget that moment a little part of her dies, broken at helping someone she loves becoming better as a person, yet still being able to hurt her. It also calls back to the beginning of the film. She has obvious doubts over him (what they are we do not know) but she loves him and her heart guides her brain and with those gloves, that seems to come rushing back to her. Back to that moment in her mother’s garden.

Each moment from here on out is another punch to the gut after another for the audience. Gish returning to the tea towel she had folded previously into a gown for their upcoming baby that is no an actual gown. She knows a tough decision has to be made and as usual with Gish, her character is allowed to be strong and take control of her own future.

Despite having her baby, her heart still yearns for her husband, the looks away to the door, out into the world where he is tells it all. When all becomes lost for our young wife the true pain for the audience comes in an utterly powerful and devastating moment. Completely broken and unwilling to take comfort from the doctor, she leaves to that rose garden she seemed to love so much like a walking zombie. Devoid of emotion until she trashes it. Finally letting and her anger, grief and frustration out on the world, unable to contain them any longer. Her performance is as raw as you will see in this era.

Although she played a character that would be considered a waif, it is the realness that she would bring to said character that would make her stand out from others for the next 15 years. It is a true tour de force performance from Lillian Gish and an unforgettable one that helped make her a true cinematic star.