Another week, another letter filled with horror films. This time out we move onto J and we are getting close to halfway through our list! This week we have an awful lot of under-appreciated or just plain forgotten horrors from years gone by, so let’s just get right into it!

I will not hear anything from anyone. Jaws is a horror film and one of the best. Whether it be the scenes of the shark attacks or the rising sense of dread of an attack or that Indianapolis speech. The acting is phenomenal from, our three heroes’ right down to Murray Hamilton’s performance as the obtuse Mayor. We all know the story of how the shark would not work, and in the end, we have to be so thankful that it didn’t, we wouldn’t have had this version of Jaws and what would our summers be like if we didn’t?

There is not a lot of love for Jennifer’s Body and I do not fully understand why. Was it Megan Fox fatigue? Was it too female-centric? For me, it was quite an enjoyable film that is razor-sharp, which was to be expected. The same way Ginger Snaps utilised the female-centric and “hormonal” change in our characters, Jennifer’s Body hits all the right spots even down to the gore. A horror that isn’t afraid to be funny and it works well is one that we should cherish a little more. Hopefully down the line, this finds a bit more love.

A film that didn’t really break its head above water in a world of slashers. Just Before Dawn is far better than it has any right in this world to be. A film about five teenagers camping in the woods until something evil strikes do not sound like the scariest film in the world. We have likeable characters and a script that allows them to develop over time. Imagine that. This means that the deaths are a little more spread out that you would expect, for horror fans nowadays, this is almost perfect. Catch this one if you can.

Translated as Hell and boy does the film try it’s best to show you a version of it. Though do not be distracted by these scenes as there is a lot more going on. What Jigoku has going for it is its ability to mix, comedy, drama and sadistic horror perfectly. This is another film that will have gotten by a lot of people and if Takeshi Miike was not influenced by the final third of this film to create the astonishing body of work that he has, then I am not sure of anything anymore. 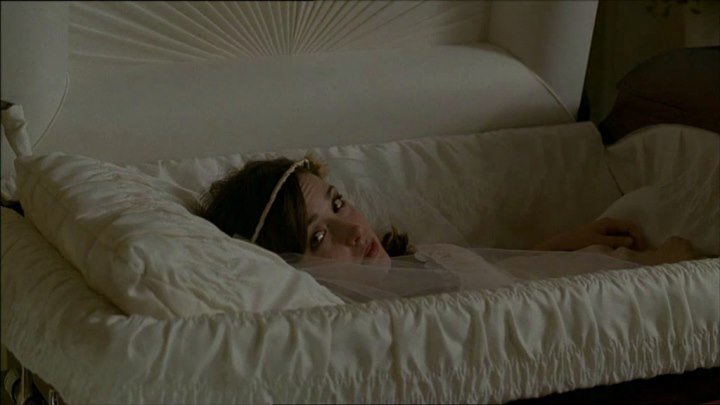 As black as a black comedy can get. With a premise that a struggling funeral home business has to resort to murdering people in their town to drum up business is not enough to sway you into watching Just Buried then what will it take!? A fantastic premise and one that is able to pull it off. Barely a character in the film is sympathetic and it is glorious. Not only is this a black horror-comedy, but it is an underdog story and one that involves a character that we simultaneously do want to see success and fail. Marvellous.

J just seems to be full of underappreciated films, doesn’t it!? Jacobs Ladder meets Source Code is probably the best way to describe the film, though don’t quote me on that. Having high-level actors is always going to make your film better and we have that here with Adrian Brody, Kiera Knightley and Jennifer Jason Leigh. I am very much a fan of psychological horror and with the use of time travel or the idea of it raises my interests further. Horror-Sci Fi is very much my jam! What stood out for me in the Jacket was the camera choices, we have close-ups, but from angles, you wouldn’t normally expect.

With a first-half that sucks the audience in due to the creepy atmosphere it evokes, Julias Eyes is a great watch. The suspense rises through the film and it does have a retro feel to it. It doesn’t feel like a film made for current audiences as it is so deeply influenced by horror thrillers of decades gone by. Some of the plot points cause the film to go a little wayward, but not enough to distract from the overall film.

It was a difficult decision to add this one into the list due to the personal life of the writer/director. But we have stuck with it as it was an enjoyable watch and I had fond memories of it. I remember seeing it in the cinema with my sister and our discussions of if we would do what the on-screen siblings would do kept us busy for the whole walk home. It felt clever to teenage me and at the time it was a welcome addition to the genre. The less said about those sequels the better though.

Such a fresh film (not the Rotten Tomatoes kind), Jacobs Ladder is visually arresting and a film that you really cannot look away from without thinking that you might lose the sense of what is happening. Few horror films cause you to have to watch it numerous times to find all of the clues, but Jacobs Ladder does. Everyone in the film worked to such a high level to achieve what we have here and again, it is another film that is often excluded from lists and thoughts. Director Lyne really allows the viewer to feel the grief, PTSD of poor Jacob, to try and also understand what is happening. Tim Robbins pulls off a masterclass of a performance.

Yes, we placed Ju On in the G post, so you will have to forgive us for our little cheat! We have a film that does not want to wait around to set up the plot before the scares come in and not only do the scares come quick and fast, but they are effective in that classic J-horror kind of way. The drawback to this is that the plot takes a hit and we do not really get proper development. This doesn’t matter too much however and we are left with a film that is far more terrifying than you would expect.

No, not the Michael Keaton feel-good film. But its brother from another mother (and a year earlier). This is not a serious film, but jeez it is a daft blast of one. As cheesy as a horror B-movie can get, yet it has an abundance of moments that are memorable! A film about a killer snowman is one that is hard for non-horror fans to get their head around, but for those who know and love the genre, it is a concept that makes you want to rub your hands in glee.

For those of us in the UK and Australia, you may know this film as Road Kill. What should really just be a standard chase horror film turns into a film that has more character development than you could shake a stick at. The set pieces are hugely effective, with their mix of Duel and The Hitcher. Joy Ride is as early 2000s as it gets and with its music and characters, but it is a hoot of a film that shows that gore is not required to make a B-movie work.

That is us for another week! Next time out we go straight onto the letter K, we really are flying through the letters at this point. Have a check below for our list of the letters we have come across those far!